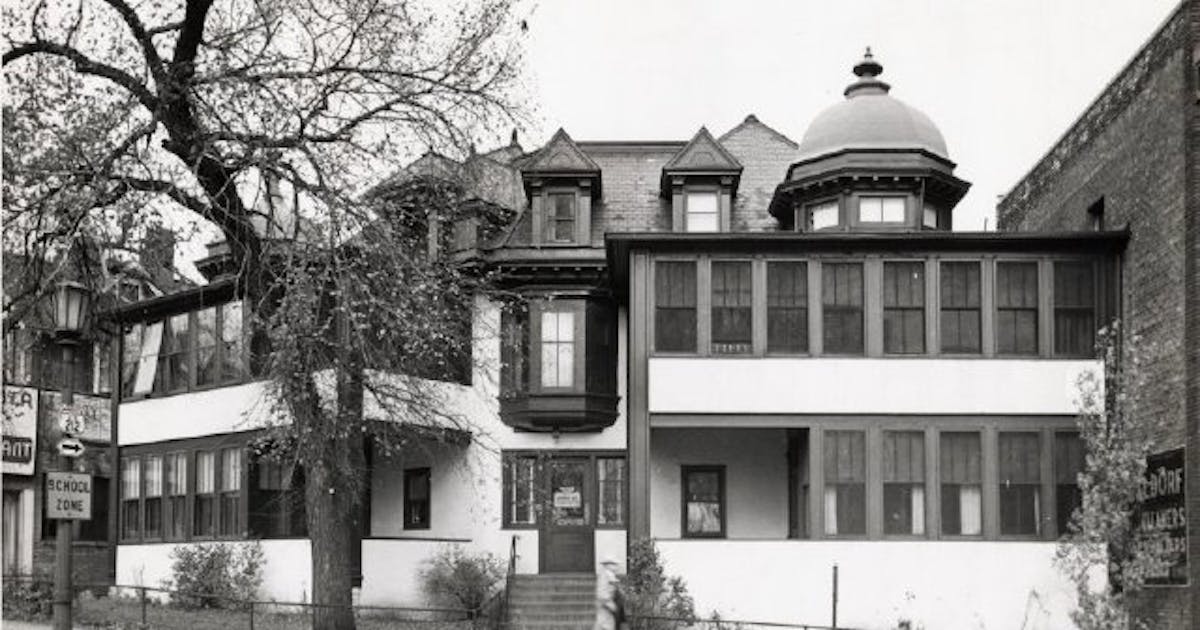 A section of the majestic Summit Avenue in St. Paul was destroyed by the wrecking ball

Summit Avenue has long been St. Paul’s most famous street, a collection of money and mansions that forms the great central backbone of the city.

But Summit isn’t quite the avenue it used to be. Before urban renewal and highway construction upended large swathes of St. Paul’s, Summit was actually about seven blocks longer than it is now.

Today the summit ends at Kellogg Blvd. like a one-block stretch of street near St. Paul’s Cathedral. However, it once extended to Robert Street in downtown Saint-Paul.

From Kellogg, the lost stretch of Summit followed a northeastward course through the site of the Minnesota History Center, past the I-94 corridor, and then along the southern edge of the Minnesota State Capitol Mall near the 12th Street. After jogging north to Wabasha Street, it continued along what is now Columbus Avenue before finally ending at Robert.

Because it housed only a few mansions or other buildings of architectural significance, this part of Summit is hardly known today, and only a few photographs document its existence.

Still, it was an interesting street, densely built with three to six story apartment buildings, quads, duplexes, guesthouses, a handful of mansions, and several small commercial buildings. As such, it was a typical mixed-use street of the once common genre on the outskirts of downtown Saint-Paul.

One of the most important landmarks on The Lost Avenue was the six-story Marlborough Hotel, built in 1894 where today is the center of history. Designed by Saint-Paul architect Hermann Kretz, the Marlborough was one of the grand residential hotels that once clustered around the western and northern edges of downtown Saint-Paul.

These six to eight story hotels, equipped with elevators, first appeared in the Twin Cities in the late 1880s. Previously, most collective dwellings were two or three story townhouses.

Crossed by central skylights that gave it an hourglass shape, the Marlborough (demolished in 1972) featured a deep arched entrance and many bay windows. Inside, there were mosaic floors and hallways lined with marble paneling, but the apartments don’t appear to have been particularly large or luxurious.

Kretz, incidentally, enjoyed a long and lucrative career at Saint-Paul. His company designed many other buildings, including the Angus Hotel (now the Blair House condominiums, built in 1887) on Selby and Western avenues.

The only real mansion district on the Lost End of Summit was between St. Peter Street and Wabasha Street. There, along the north side of the avenue, a row of four large houses stood behind low retaining walls.

By far the largest and most splendid of these houses was built at 11 Summit in 1891 by Peter Pfeifer, who died a year later, leaving him little time to enjoy his new mansion.

According to a recent study of the mansion prepared by house historian Kathleen Kullberg, Pfeifer was one of the many German immigrants who made it to St. Paul in the 19th century. He arrived in the city in 1857, started a dizzying variety of business ventures, and eventually built a significant stone building called the Pfeifer Block (long gone) on 8th and Wabasha streets, a few blocks from his future residence.

Sadly, it’s hard to find good footage of Pfeifer’s Brownstone Mansion (razed circa 1952). But a photograph taken around 1900 shows that the house was in Roman Revival style with a touch of Germanic aroma.

The high-roofed mansion, which in 1925 became the offices of the Minnesota Public Health Association, featured round towers in the front and back, an ornate central skylight, and a wide front porch. It was quite home, one that would not have moved to Summit Avenue today.

Beyond Wabasha Street, East Summit Avenue (as it was designated) ran along the southern edge of long-gone Central Park, now the site of a parking ramp behind the Centennial office building. Among the distinctive buildings in this part of Summit was another work by Kretz, the three-story Elsinore Apartments, built in 1893 and demolished in 1960.

Nearby was a true rarity – the only industrial building to have ever seen Summit. Built in 1913 for the St. Paul Bread Co. (later known as Taystee Bakery, among other names), the four-story structure stood on Minnesota Street between 12th and Summit. Long an olfactory attraction of the Capitol district, it was razed in 1990.

What happened to the Lost Section of Summit is in many ways the history of the modern era of downtown St. Paul, which saw virtually all of the old semi-residential neighborhoods on the outskirts of downtown. destroyed from the 1950s.

The State Capitol Mall began this grand urban reorganization, and dozens of old buildings were swept away to make way for the mall and the new government structures that surround it.

The construction of I-94 and I-35E, starting in the 1960s, resulted in even more destruction as well as the relocation, renaming or elimination of many historic streets.

By the early 1970s, the old downtown section of Summit was gone, a reminder that even St. Paul’s most famous thoroughfare is not immune to the unleashed forces of urban change.

Larry Millett is an architecture critic and author. He can be contacted at larrymillett.com.