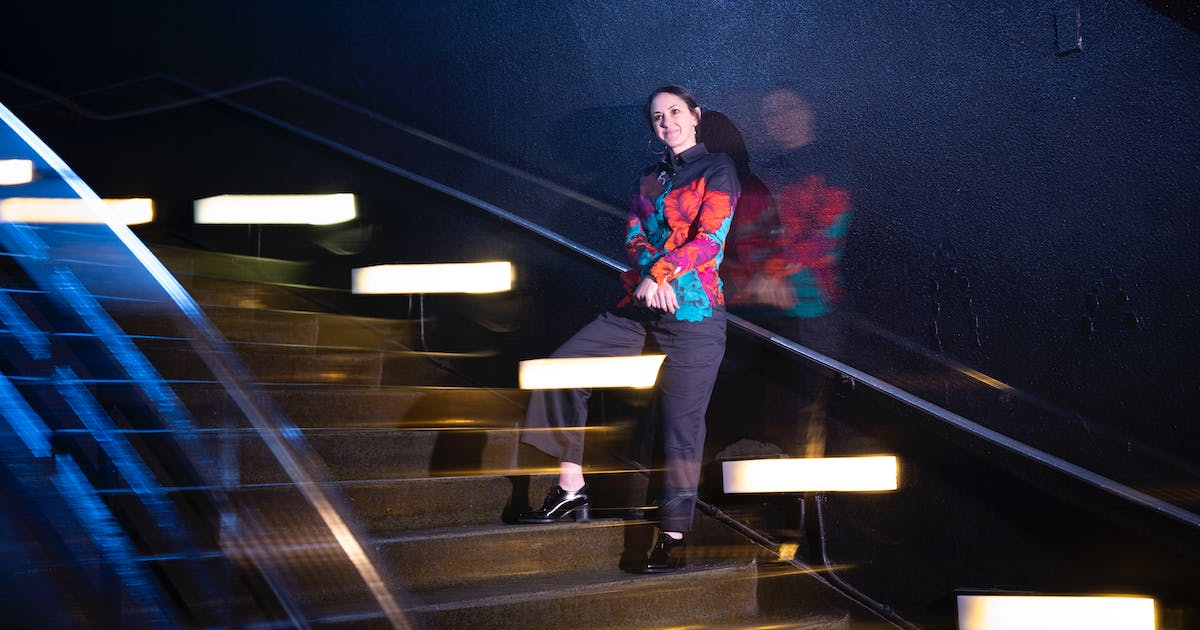 Artist of the Year: Dayna Frank of First Avenue led the way to save our stages

Few independent concert halls in the United States were in better shape to survive 18 months without income than First Avenue. And yet, Minneapolis’ most iconic performance space faltered as it turned black.

This is how Dayna Frank knew things had to be incredibly difficult everywhere.

“People took it for granted that there would always be a concert hall on the corner of 1st Avenue and 7th Street in downtown Minneapolis,” the owner of First Avenue Productions said with an intense thrill. “All of a sudden there was a very real possibility that it wasn’t the case anymore.

“And if First Avenue was in danger – with all of its history, its strengths, and the support of the community – then so many small venues didn’t stand a chance.”

That’s what Frank has done for everyone else, as president of the National Independent Venues Association (NIVA), which has earned him the Star Tribune’s Artist Personality of the Year award. That, and his First Ave team led the way in making live performances safer for audiences in Twin Cities in 2021.

Chosen by our Arts and Entertainment Editors and Editors, the Annual Honor has been changed from the usual wording “Artist of the Year” since Frank is not an Artist. Not unless you consider lobbying in Washington, DC or home schooling two elementary boys during the pandemic to be an art (they sure are in his new experience!).

Still, it’s hard to think of anyone who had a bigger impact on Minnesota’s arts scene in 2021, including all facets of the performing arts, not just music.

With Frank, 42, as president, NIVA quickly concocted a coalition of independent venue owners, promoters, artists and fans of music and theater to pressure Congress to pass a relief bill at the end of 2020.

Everyone from Willie Nelson and Billie Eilish to Jerry Seinfeld and the Broadway stars have participated in NIVA’s efforts to lobby Congress – as has a real lobbying firm hired for the cause, Akin Gump, who generally advocates republican causes.

This cause turned out to be exceptionally bipartite. It also made Frank sort of a star in unexpected ways, with articles in Rolling Stone, Billboard, and the New York Times and even a trip to the Rock and Roll Hall of Fame induction ceremony in October, where organizers of NIVA were honored.

“Dayna’s passion is contagious and [made] it happens, ”said Senator Amy Klobuchar, D-Minn., who co-sponsored the Save Our Stages bill with Republican Senator John Cornyn of Texas.

After long delays that looked like the government version of the Prince’s First Ave concerts (the little guy was determined to keep fans waiting in his favorite hometown), the relief money finally started to flow in late July in the form of Shuttered Venue Operators Grants (SVOG).

By the end of the year, almost all of the $ 16 billion was in the hands of NIVA affiliates, including about $ 173 million for Minnesota venues and arts organizations.

These included the Hennepin Theater Trust ($ 9.5 million), the Guthrie Theater ($ 7 million), the Minnesota Orchestra and the Ordway Center for the Arts ($ 5 million each) as well as musical havens. smaller ones such as the Cedar Cultural Center, Icehouse, and Crooners Lounge (all between $ 400,000 and $ 725,000), numbers all based on pre-COVID income reports.

“Dayna’s tireless work on NIVA and its resources has been invaluable,” said Patricia McLean, CEO of Sue McLean & Associates (SMA) – a First Avenue competitor who received just over $ 1 million in cash. SVOG to continue producing the Music in the Zoo series. and other concerts.

SMA President Kimberly Gottschalk added, “I have the utmost respect for female leadership in our industry. And to see Dayna grow from a local leader to a leading national figure has been nothing short of amazing. I really don’t think the impact of what she’s done to save our industry can be overstated. “

NIVA is also far from over. It will run until 2022 as a trade association providing advice on taxes, real estate and ways to provide healthcare to employees and musicians. Frank’s leadership will likely be felt for years to come across the country.

She recently launched another new initiative with South Carolina developers Grubb Properties – the Live Venue Recovery Fund, which aims to help more site operators buy their properties instead of being paid by fueled rent increases. through gentrification.

“Dayna has kind of become the Stacey Abrams of the concert industry,” said NIVA co-founder Gary Witt, executive director of the Pabst Theater Group in Milwaukee.

Noting that independent sites often “take our independence too literally” and don’t work together enough, Witt said Frank “created this grassroots organization to give voice to a group of disconnected voters – in this case , companies – which were previously speechless. “

Klobuchar said NIVA’s grassroots efforts were key to getting the attention of Congress. She sees First Avenue as “a northern star for independent concert halls across the country, so it made sense that Dayna would be a leader in this effort. And she was a good leader.”

It took another case of unexpected duress to get Frank into the concert industry in the first place.

Raised in Golden Valley and a First Ave user in her teens – the Pixies was her first show, she was lucky – she was living in Los Angeles, working as a producer for VH1, when her accountant father, Byron Frank, went was awarded primary ownership of the club in 2004 following a bankruptcy battle.

Byron has always been more interested in preserving First Ave than in its management. After suffering a stroke in 2009, he told his two daughters that he would sell it to Live Nation or some other deep-pocketed company if neither of them wanted to take over.

“The idea that the club could end up in the hands of a company that is not accountable to Minneapolis / St. Paul and did not inherently understand the beauty of this market… was unfathomable,” Dayna said in an interview. of 2014 which foreshadowed the spiel. she would deliver daily during the COVID shutdown.

NIVA highlighted the multi-layered impact of local sites – as tax generators and job creators for their cities, as anchor points for neighboring businesses like restaurants and hotels, and as spiritual sanctuaries as well. First Avenue’s economic impact has been valued at over $ 4 million in SVOG money, split between its namesake club and St. Paul-based sister venues, the Palace Theater and the Turf Club.

These latter two sites were added to the company’s portfolio over the decade at the helm of Dayna. The same goes for the Fine Line and the Fitzgerald Theater in the two years leading up to COVID.

Frank also successfully co-led the push for the concert amphitheater operated by First Ave and included in the $ 350 million Upper Harbor Terminal redevelopment plan north of downtown Minneapolis. City council finally approved the plan in October – another thing to celebrate in late 2021 after the SVOG campaign, although the inauguration probably won’t be until 2023.

While the timing of the SVOG money wasn’t exactly perfect – “We could have used more time to train, hire and make improvements,” Frank conceded – it happened just as the First Ave sites started to move again in early July. But a new challenge quickly arrived.

She and her team were actually opposed at first to demanding a COVID vaccine or documentation of test results, saying, “It didn’t look right politically.

“There were those magical few weeks starting in July where if you were vaccinated you couldn’t catch the virus or spread it,” said the club owner. “But then the Delta variant came along, and groundbreaking cases started to happen, and all of this new information came out.

“There wasn’t a lot of debate after that.”

On August 2, First Avenue announced that vaccine proof or negative COVID test results would be required for entry to all shows at all of its venues, effective immediately.

It was the first event company in Minnesota to do so, and one of the first in the country. Other local institutions quickly followed suit, including the Guthrie, Minnesota Orchestra and Hennepin theaters.

The new requirements only added to the need for SVOG cash, as employees needed to be hired and trained to handle security protocols – and the resulting complaints, confusion and claims.

Frank said these negatives were more than outweighed by the appreciation of the policy, which was implemented smoothly from the start (the lines are actually shorter than usual nowadays with the help of metal detectors and electronic ticket readers).

And of the more than 400 employees who work among the five sites affiliated with First Ave, only a handful have contracted COVID since July.

The policy “was never a business decision,” Frank said. “It’s always been a safety decision. We did it to keep our employees, our customers and our larger community safe. Period.”

Thinking back to all the unexpected requests of the past two years, Frank has expressed only one regret, which most parents reading this might expect:

“My boys ate a lot of mac and cheese and hot dogs, and watched a lot of movies.”

In addition to challenges on the home front, Frank’s wife, Ember Truesdell – a longtime producer for Drew Barrymore – has spent much of the pandemic working in New York City to start the new daytime talk show of the ‘actress.

“But we did it! Frank said contentedly. “Everyone is in school and doing activities again. Venues are open again. Ticket sales are as strong as they’ve ever been in 2022.”

“My boys are tough, luckily, and so is First Avenue. “

And now, many more performing arts hosts are too.

Chris Riemenschneider has been covering the Twin Cities music scene since 2001, long enough for Prince to shout it out during “Play That Funky Music (White Boy)”. The St. Paul native is the author of the book “First Avenue: Minnesota’s Mainroom” and previously worked as a music critic at the Austin American-Statesman in Texas.

2021-12-26
Previous Post: Concourse: construction requests filed for the conversion of the building at 1315 Findlay avenue
Next Post: The Brooklyn Tower facade continues its ascent at 9 DeKalb Avenue in downtown Brooklyn