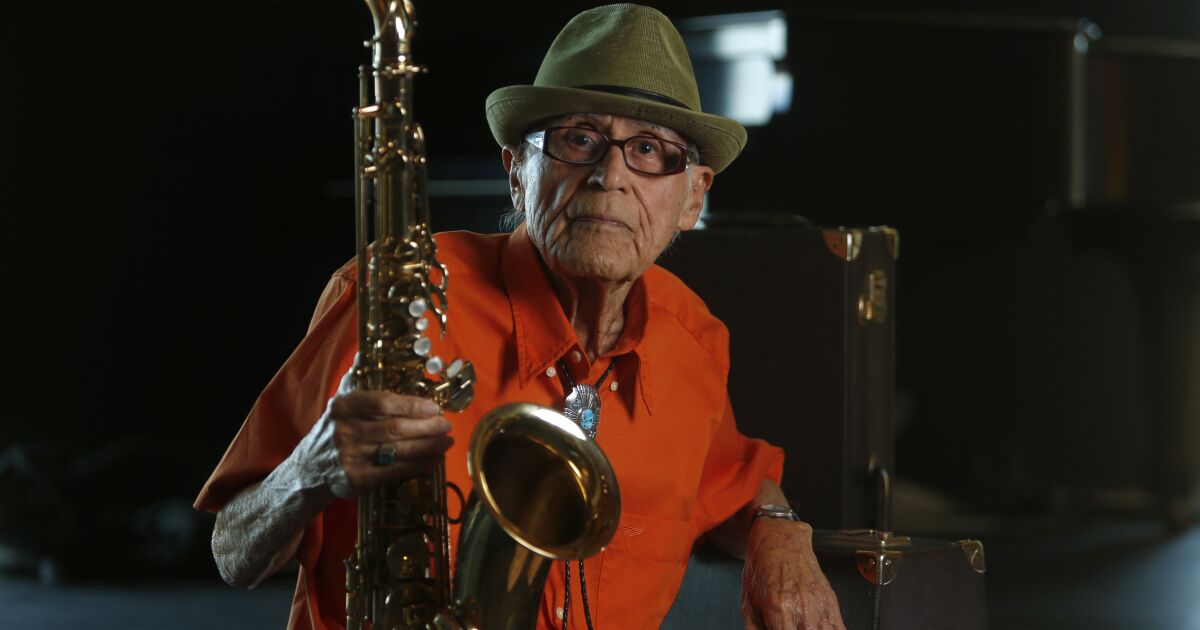 Anthony Ortega did almost everything imaginable in a music career that spanned 70 years, including leading a weekly Sunday jam session – until the mid-1990s – until his health began to fail. decline in August.

He has collaborated with Frank Sinatra and Frank Zappa, Tony Bennett and Tony Orlando, Marvin Gaye and Quincy Jones. He’s performed on movie soundtracks, including playing the bravado improvised saxophone solo in Oscar-nominated “An Unmarried Woman,” and was part of the house bands for “The Julie Andrews Show” and “The Redd Foxx.” ABC’s Comedy Hour. He has also taught jazz master classes at French universities and produced avant-garde albums that have gained international acclaim.

But there’s at least one notable thing that Ortega — who died of complications from pneumonia Sunday in an Encinitas hospital at age 94 — didn’t do, and that was by choice.

“In 1972, Dad had the opportunity to go on a concert tour with Elvis Presley,” recalls Kathy Herington, one of Ortega’s three daughters. “But my brother was about to graduate from high school and dad didn’t want to miss the ceremony.”

The tour continued without Ortega, who had appeared — playing sax at a street party — in “Change of Habit,” a 1969 feature film that starred Presley and Mary Tyler Moore.

“When I was a kid, Dad sometimes took me with him when he played in Leighton Noble’s big band at the South Shore Hall in Harrah’s Lake Tahoe,” recalls Antony Ortega Jr., a dentist in Los Angeles.

“I got to see dad rehearse with Nat ‘King’ Cole and Barbra Streisand, and I saw him play with Jerry Lewis. Dad was playing a flute solo and Jerry was pretending he was doing the solo. My dad loved to play music and he couldn’t get enough of it, almost until the day he died.

The dedicated saxophonist’s final performance took place Aug. 21 at Mr. Peabody’s Bar & Grill in Encinitas, where — since 2011 — he had led a Sunday jam session nearly every week until his health began to fail at the time. end of this summer. His only concession to age was to play seated rather than standing.

“Tony was a master,” said Mark Dresser, a music teacher at UC San Diego who regularly played bass with Ortega during San Diego jam sessions in the 1970s.

“He was a true improviser, both completely rooted in lore, essentially linear, and yet completely free in his playing,” Dresser said. “He had an expansive sound … a rhythmic vitality and a willingness to dig into the sonic nooks where the music took him. He was remarkable.

“I have always been inspired by music, from an early age. And my whole dream was to play sax,” Ortega said in a 2016 San Diego Union-Tribune interview.

After serving in the US Army from 1948 to 1951, he joined vibraphone star Lionel Hampton’s big band. While touring Europe with Hampton, Ortega met pianist/vibraphonist Mona Ørbeck in Oslo.

The couple, who became professional music collaborators, got married and celebrated their 69th wedding anniversary this year. They moved to El Monte in 1954 and to Hollywood two years later. They moved to Lake Tahoe around 1960 and to Azusa in 1965, before settling in Encinitas in northern San Diego County in 1975.

Ortega’s debut album, “The Anthony Ortega Quartet”, was released in 1954. His 1961 all-star album, “A Man and His Horns”, featured him doubling all of the multiple horn parts.

Ortega’s last album, “Afternoon in Paris”, was released in 2007 on the Swiss label Hat Hut. It was the subject of the 1994 book, “Central Avenue Sounds: Anthony Ortega” and the 2007 documentary film, “The Street We Took”.

Yet while jazz was his greatest musical passion, Ortega’s instrumental versatility allowed him to work with singers as diverse as Sinatra, Streisand and José Feliciano. Ortega’s big band credits included ensembles led by Hampton, Gerald Clayton, Maynard Ferguson, Woody Herman and others. He has also worked in small groups with Dizzy Gillespie, Chico Hamilton, Buddy Colette, Gigi Gryce and many others.

Ortega has performed on the soundtracks of many films, including “Gloria”, “The Pawnbroker” and “I, the Jury”. Her TV credits included “The Lucy Show” and “The Bobby Darin Show”.

“When we lived in Los Angeles, we would huddle around the TV and watch dad when he was on the Julie Andrews show,” recalls Kathy, daughter of Ortega, who sang in the San Diego band, The Fabulous Mar Dels, from 1994 to 2008. “Dad got us his autograph and we were like, ‘Wow! It’s Mary Poppins!’

For all his many credits with other musicians, it was as a solo artist, songwriter, and bandleader that Ortega shone brightest. The element of surprise was paramount in his playing, whether in a traditional or experimental setting, or somewhere in between.

“I like to have a nice sound and make it pretty. However, in different cases you get more brutal and it feels more like exploration,” Ortega said in his 2016 Union-Tribune interview.

“The point is not to exaggerate any particular thing – and see it as a story, or a value, in the composition you’re trying to convey,” he said.

Ortega’s daughter Kathy and son Tony Jr. both marvel at their father’s dedication to music, on and off stage, and to his family.

“He was always training at home, always improving,” Tony Jr. said. ‘wasn’t he famous?’ But her dedication was to music, not to trying to become a star.