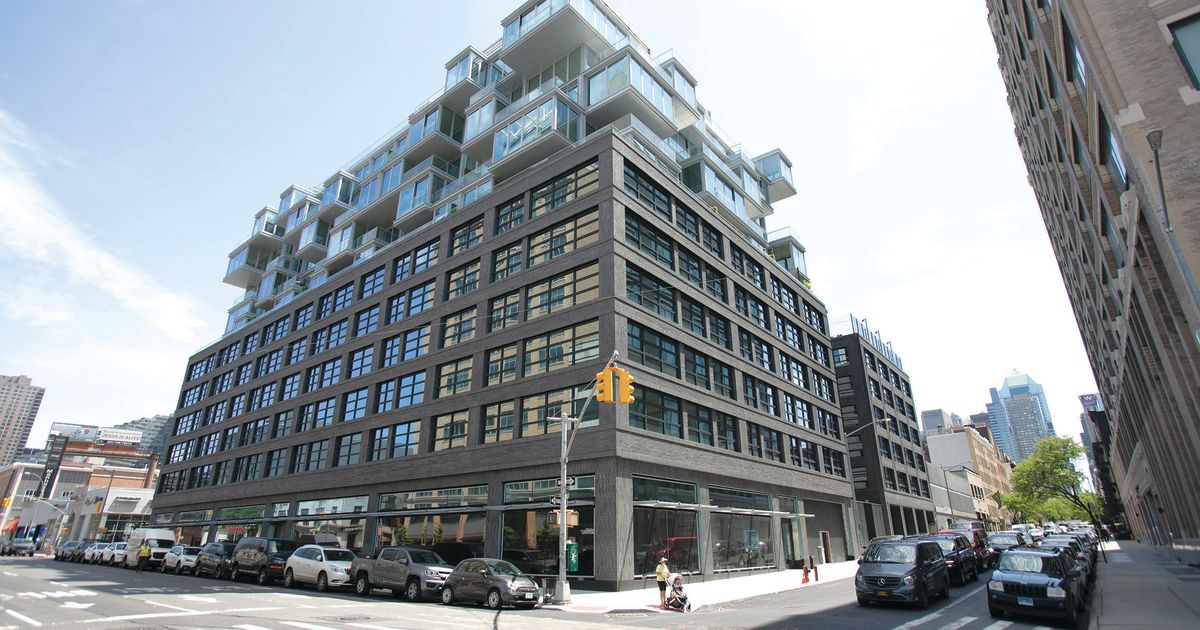 The Hotel Vu was among the first projects to seize the potential of this site in 2007, offering 222 rooms in this 16-storey former printing works in tawny bricks. But the Great Recession seems to have hurt the project. Three years later, some rooms and common areas were still under construction, according to dispatches. Along the way, the hotel, which is operated by the global Kimpton chain, changed its name, and it did so by leaning back to its publishing roots. Today it’s called Ink 48. More recently, the building that houses the hotel, which offers a rooftop pool and rooms from $463 on weekends, found a new owner. Brookfield Properties scooped it up from a branch of Prudential Insurance for $83 million in 2019.

The West Residence Club completed construction in March. The 219-unit full-block condo comes from SK Development, CB Developers, and Ironstate Development. The team has previously collaborated at Jefferson, an East Village condo, and 1228 Madison Ave., an Upper East Side co-op. In 2018, the developers spent $93 million to buy No. 547 from Bay Ridge Automotive Management, which sold Lexuses there. But Bay Ridge isn’t completely getting out of the automotive business. Earlier in the spring, the company turned around and paid $22 million for a spot at the base of No. 547, where it will showcase Cadillacs. But mechanics can’t actually fix cars; technically, the site is not zoned for manufacturing. Tune-ups can only be performed at dealerships on the east side of the street, zoned appropriately.

A Sunoco gas station and auto repair shop stood on this corner site until recently. But the owner, Semyon Ruvinsky, a Brooklyn landlord, capitalized on zoning that allows commercial buildings other than factories and built a 5-story, 25,000 square foot glass-enclosed office building. The midrise, which received its certificate of occupancy in 2020, would be the new home of the Manhattan Maserati dealership, although as of this month the dealership was still at its old address at West 54th Street and West Side Highway. Barbizon Lighting Co., which creates installations for museums and theaters, has also rented two floors. Societe Generale bank loaned Ruvinsky $7 million in 2021, according to city financial records, $5 million of which was considered a bridge loan.

Sullivan Street Bakery, which started making bread in SoHo in 1994, moved its main kitchen to this address in 2000. In 2018, it added a cafe that was popular with employees of nearby-based ad agencies, although that some of these companies have since moved. During its first decade in this building, which dates from 1946 and once housed an air conditioning company, the bakery was a tenant, according to property records. But bakery co-owner Jim Lahey bought the 7,800-square-foot structure from Murray Greenstein’s estate for $1.7 million in 2010.

When cars first came to town in the early 20th century, Times Square was where vendors hawked them. Dealerships later lined Broadway in the 1950s West, earning it the name Automobile Row. After World War II, the neighborhood moved to 11th Avenue, where people have gone to buy sedans and trucks ever since. But dealers tend to jump. This 17,000 square foot structure, dating from 1955, has housed several brands, including Honda and Lexus, which moved from 547 W. 47th St. across the street. The Florida-based Schlanger family now owns number 627, according to tax records and court documents. The family has owned automobile franchises in Manhattan since the early 1960s.

This 11-story building, built in 1913 for the Auerbach chocolate factory, seemed to be on the cutting edge of a trend a few decades ago. In 2009, as office owners and apartment developers began to move into an industrial district, advertising giant Ogilvy and Mather leased the 550,000 square feet. About 1,200 people once worked inside. But last year the company, now called Ogilvy, took a stake in a new home at 200 Fifth Ave., across from Madison Square Park, although the company’s lease still lasts seven years. Online listings suggest the building is still looking for tenants to sublet the empty space. The Hakimian Organization bought the building for $95 million in 2005 with plans to put apartments in the property, which has 13-foot ceilings and views of the Hudson River. But faced with a strong rental market, Hakimian reportedly shifted gears and opted for offices instead.

One type of car that was once seen all the time on 11th Avenue was taxis, which were often parked on the sidewalk to allow their drivers to eat at restaurants along the street. Likewise, this single-story structure, built in 1955, was for years a taxi repair shop, according to property records. Its function has not changed much; Alpha Car Wash is here today. Yude Bet Mem, a company whose chairman is Sunny Cohen, bought the site for $700,000 in 2002. When the pandemic hit, its market value was around $1.1 million, according to city figures . It’s now $899,000, though city estimates may be low. Zoning laws would allow a much taller building up to 5 stories on the 25 foot wide property, but the site is zoned for manufacturing making a condo unlikely at this time.