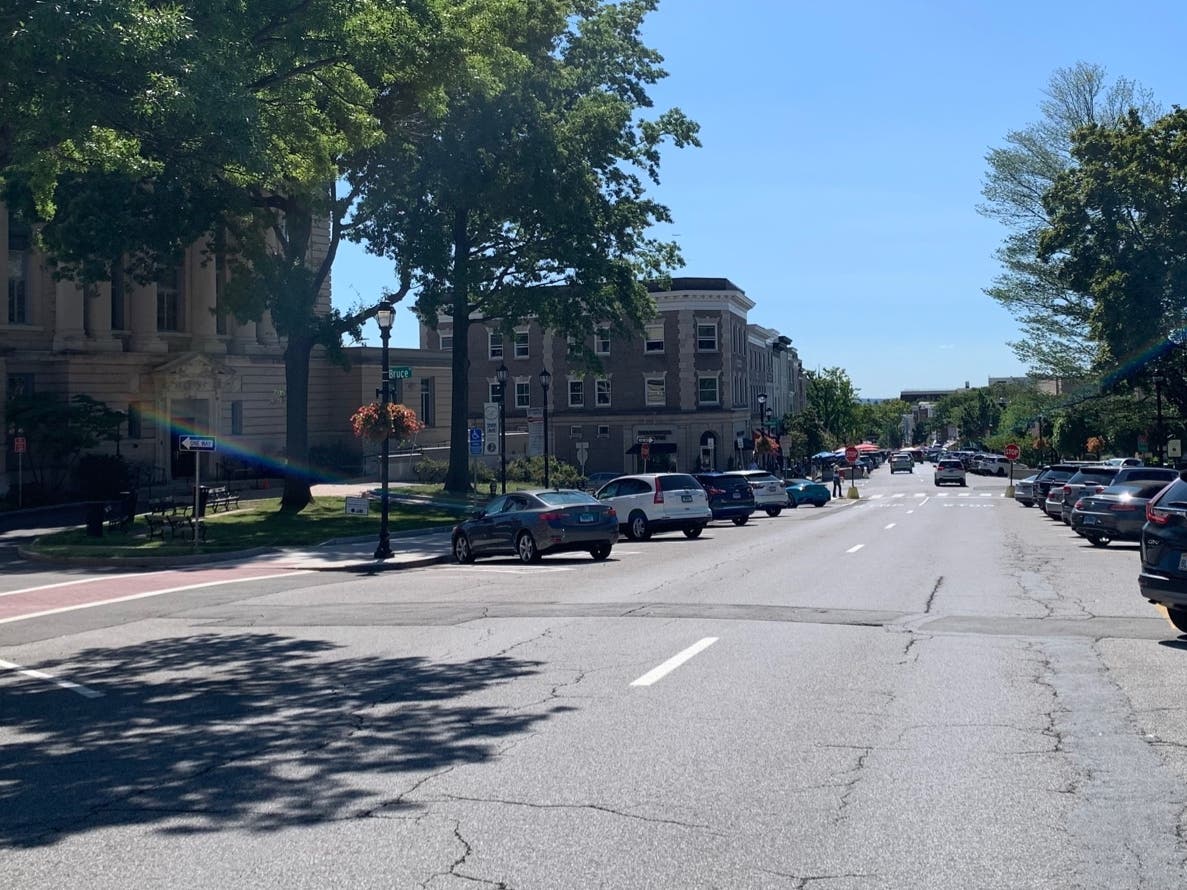 GREENWICH, CT – Last week, a pre-application calling for safety and aesthetic improvements at two intersections on Greenwich Avenue was presented to the Planning and Zoning Commission and met with some objections from the from local residents and homeowners.

The pre-application process allows for a non-binding discussion with the commission on the pros and cons of a proposal before a substantial investment is made in developing plans, reports and studies.

Find out what’s going on in Greenwich with free real-time Patch updates.

The construction would add bumps that would help improve the visual connection between pedestrian and driver, and reduce crossing distance and crossing time for pedestrians in crosswalks. Arch Street would be more closely aligned with Havemeyer Place. Currently, motorists must take Greenwich Avenue in the opposite direction for a short distance to get from Arch to Havemeyer.

The plan also includes the creation of 3,600 square feet of new green space as well as new sidewalks, curbs and roadways. Lighting, signage, benches, bicycle racks and decorative crosswalks would also be improved.

Find out what’s going on in Greenwich with free real-time Patch updates.

However, the project would remove parking spaces on Greenwich Avenue, which owners and residents say are desperately needed for those looking to shop or dine along the hallway.

First coach Fred Camillo expressed a desire to see improvements at several intersections on Greenwich Avenue and elsewhere in the city.

“The main objective of this project, and the entire Greenwich Avenue project, is to improve the safety of all users of the avenue,” said Jason Kaufman, principal civil engineer of the works department. Greenwich public.

Kaufman said there are concerns about car crashes on Greenwich Avenue, particularly at several locations where parking spaces conflict with crosswalks and approaches to stop signs.

Kaufman noted that 43 parking spaces would be lost in the entirety of Greenwich Avenue as a result of these projects, but DPW plans to add new accessible spaces, as well as several standard and ADA spaces directly adjacent to the avenue. . A net loss of 29 places can be expected, Kaufman said, which equates to a 7% reduction in the total number of places.

Many lost spaces overlap about 39 spaces “which directly contribute to the high rate of parking-related accidents on Greenwich Avenue,” Kaufman said.

Resident Lucy Krasnor said she opposed the plan because of the impact on parking, which has plagued central Greenwich for decades.

“Greenwich Avenue is basically like 5th Avenue in New York City. We need to keep it vibrant. If there’s no way to find a place to park, people just won’t use the avenue and that will make retail less viable,” Krasnor said. . “I’m very concerned about that. I don’t think these changes are necessary, I don’t think it’s a dangerous situation and I think removing parking is just a bad idea.”

Martin Rader, who works for a local real estate company that owns several buildings on Greenwich Avenue, including the building in which the popular Meli Melo restaurant is located, said he opposed the plan.

“We are concerned that this could hurt our tenant and hurt us,” he said.

Jonathan Martin, who spoke as a representative for a Greenwich Avenue business owner, echoed those sentiments.

“These are huge numbers that are going to have an incredible impact and have huge ripple effects on tenants, retailers and building owners,” Martin said. “I think everyone is for pedestrian friendliness, but Greenwich is a big city and not everyone can walk to Greenwich Avenue.”

Several other residents have spoken out against the project, fearing that a lack of parking will deter area businesses.

P&Z President Margarita Alban said she finds the proposal consistent with the 2019 Conservation and Development Plan. The POCD serves as a guiding document for the city on physical and economic development.

Commissioner Nick Macri urged Kaufman and project planners to implement top-notch landscaping at intersections, which he called “the heart of Greenwich”, so that more pedestrians would be drawn to the area.

“I know [people] are simultaneously concerned about parking, but there is research as cities try to become more pedestrian-friendly that we can move people away from parking three feet from their retail destination and become more sustainable,” said said Alban. “It’s a tough transition to make in the United States. We are definitely a nation that loves our vehicles.”

Alban said the commission will have to weigh the benefits against the concerns of business owners and “thread the needle” as debate over the project continues.

“The DPW understands and hears the flood of concern over the loss of parking spaces on the avenue,” Kaufman said. “We are committed to doing everything possible to save parking, where necessary, while moving some to neighboring areas and adjacent cross streets.”

Kaufman said DPW has “a robust outreach plan” to get feedback on the project from all stakeholders.

Full renders and details of the latest proposal can be found on a specially created site DPW website. Residents can also leave comments on the site.