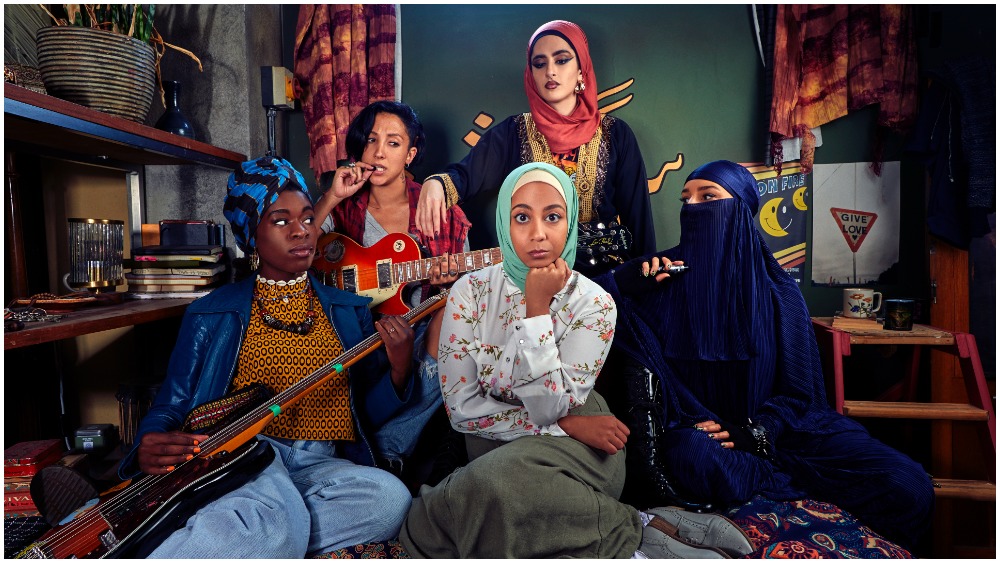 How ‘We Are Lady Parts’ costumes were an avenue for faith

“We Are Lady Parts” centers on an all-female Muslim punk band that makes music their own way, builds an audience, and balances their personal lives on and off stage.

Costume designer PC Williams designed each woman’s wardrobe to honor her relationship to her faith while using costume as a means of cultural and personal expression.

“All these women are second generation migrants, like me; I was born in the UK, but my roots come from Nigeria and Ghana. When I was thinking about these four women, for me it was really about trying to figure out who they were culturally and marrying that with a London vibe,” says Williams.

Four of the five members of the group wear some form of traditional Muslim head covering. Williams recruited several Muslim women into her design team and undertook hours of research to accurately depict how style and religion work side by side.

“A headgear is a headgear, now how you do it is entirely up to you and I wanted to show that there is not just one way to do it. You can have diversity in a group of Muslim sisters,” says Williams.

Amina’s goal is to find a life partner and earn her doctorate. in microbiology. But, when she joins the group, her plans change. Over time, she finds a new level of comfort in her identity. Amina is often found in pastel colored hijabs and minimal makeup.

“Amina was one of those characters where when you start the project you have such a clear idea of ​​what you want to do. And then as you go into the project that idea just keeps coming. twisting and turning. And I think marrying her wise sensibility with that desire, and that kind of need, to break out of that mold and lean into that new space that she inhabited, that made her feel good – that was like my biggest challenge, how do i do, how do i make cool costumes for a girl who loves A-line skirts and button up blouses and is now in a punk band.

“There’s the scene where Lady Parts is performing a Dolly Parton song and Amina is still wearing her high-waisted A-line skirt, but she’s got this shirt with a horse print on it. And that’s the first time we’ve really seen her in dark colors, and this is her version of leaning into what it means to be punk, but it’s still very cute. It’s what she could be outside of what we usually see her in, that is, pastels and heavily embroidered two-piece sets.

Bisma is very proud of her heritage and often sports bright West African political turbans and t-shirts. He is also the quietest member of the group. When not in the group, Bisma spends time selling her art at her street stall.

“Bisma is Nigerian-British, she is my sisters and me, and my cousins, and the children of mother’s friends – it’s a pride in African prints, but incorporating that in a way where it feels modern and has a western vibe, but you still hold onto what’s true to your cultural identity.

“Her art plays a big part in who she is. The interior design of her apartment is made up of a lot of upcycled and salvaged furniture and pieces. I wanted to bring that into her wardrobe – about 90% of it are finds from thrift store with fall colors, macrame and anything that looks Afro-centric.

“We used a lot of Omolola jewelry from a young Nigerian jeweler, and a lot of his jewelry is from all over Africa or from specific tribes in Nigeria using symbols that mean something to Nigerian culture.

“Bisma’s vibe is super vintage. Everything has to feel like it had three lives before it came to her, but when it hits her, it makes sense.

Ayesha is the band’s drummer. She is also an Uber driver with road rage. For her outfits, she sported shimmering Middle Eastern abayas and draped headscarves with dramatic eyeliner.

“Ayesha’s vibe is what Juliette is in real life. So rather than designing the outfits, I took a more curatorial approach to her design. I curated her wardrobe and collaborated with her I’d be like, ‘Hey, what do you think? What kind of looks would you do? So we spent an afternoon trying everything on.

“For me, it was true to who she was because she would bring a lot of herself into the character. I think sometimes when you do such a stylized character, it can feel a bit forced. I didn’t want to not want that to happen, so she played a big role in designing what she wore — dark colors, anime prints, heavy metal detailing and Aboriginal branded slogan t-shirts.

Momtaz is the core of the group. As the band’s manager, his goal is to make it a huge success.

“I wanted to make sure that a woman who wears a niqab can pick up one of the niqabs we’ve designed and wear and feel like it fits her purpose. I didn’t want it to be like this weird fashion thing. Everything should be natural. Couldn’t get the sense that the show was stylish. I’m not going to try to change the niqab from what a niqab is; what i want to do is just give you variations of that while still being modest and fit for purpose to be covered while still allowing our actress, Lucie, to feel like she was bringing something cool as well to the series. She has to spend those eight weeks covered and I can imagine that’s a big deal to take on, especially when the girls are coming out. I think Ayesha had 37 looks in the whole show as we designed four niqabs for Momtaz.

“But it was really important to me that Lucie felt that a bit of design, care and consideration had gone into her costumes, but still fit the purpose.”