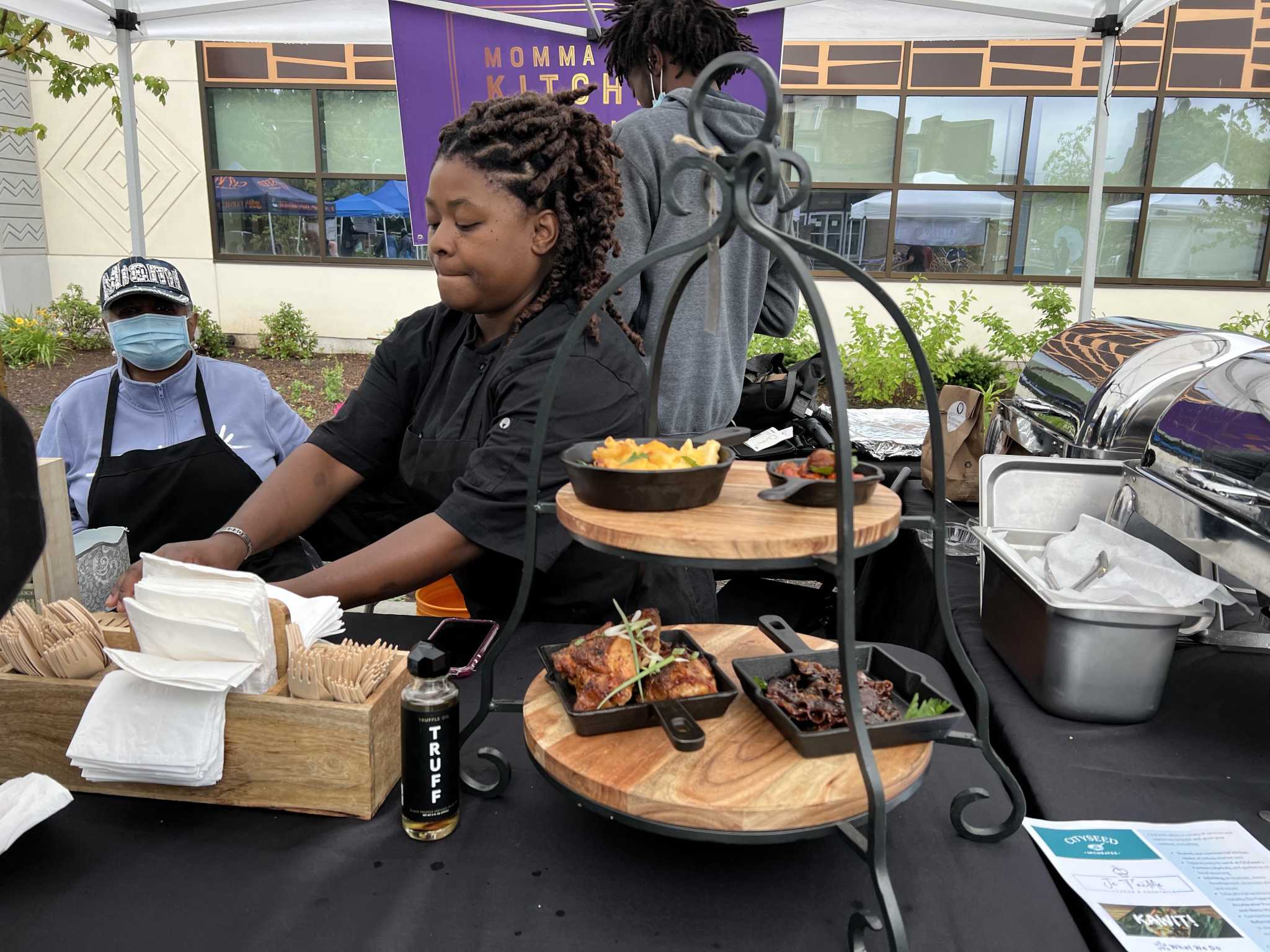 NEW HAVEN — New Haven food entrepreneurs with businesses waiting to flourish — like Kismet Douglass, the creative force behind Momma Kiss Kitchen Cuisine — will get help building businesses thanks to a new partnership between the Dixwell Community “Q” House and the nonprofits CitySeed and LEAP.

The new venture will help guide locals through the ins and outs of the food industry and teach them how to market food products in the Q House’s new commercial and educational kitchen.

With a recently announced $194,000 grant from the United States Department of Agriculture under the “Healthy Foods Funding Initiative”, CitySeed will expand its existing food incubation services to the Q House.

The grant, announced this week at a press conference attended by U.S. Richard Blumenthal, D-Conn., and Mayor Justin Elicker, aims to improve access to food and boost food entrepreneurship in the neighborhoods of Dixwell and Newhallville, considered “underserved areas” in federal parlance. .

Some locals call it a “food desert” – although there are certainly plenty of good cooks nearby.

But she’s trying to throw her own gig, whipping up some inspired dishes — including some of the tastiest mac and cheese in town with a variety of toppings — at the New Haven Night Market last month and again last Wednesday at Q Home Farmers Market.

For years, she has taken care of family and friends. She sped things up about five years ago. But now she wants to reach out a little further.

She didn’t go to school for that. Her father, who also cooked at Yale, taught her how to make this macaroni and cheese.

When Kismet Douglass started working at Yale, “I just fell in love with cooking,” she said. “I’m just like an artist.”

“I started by posting pictures of the food I was making for my kids” on social media — and people wanted to know how they could get some, Douglass said.

She went through the CitySeed food collaboration program. Now she is seeking a license to work in the kitchen at Q House.

“Thanks to CitySeed, they gave me confidence,” she said. “I have insurance. My ultimate goal is to eventually have my own brick and mortar place, maybe a cafe.

She said she wanted to use local markets to source food “so I can really get the freshest food possible.”

The grant is actually for CitySeed, but it “gives funds to CitySeed and LEAP for work at Q House,” said Fernandez, who manages Q House.

What will he do exactly?

“It really increases the capacity,” Fernandez said. “It opens up a lot more hours and a lot more spaces to have business-related courses. There are many increases in the scale of this class work.

It also “creates opportunities for people to use the Q House commercial kitchen for their produce,” he said. “The space is then cleared for this purpose.”

There are currently several entrepreneurs using the kitchen, but that will grow, he said. Some of them, like Douglass, also sell their produce at the Farmer’s Market.

The goal, “especially since New Haven is truly a city of restaurants and foodies, is to ensure that members of the community, people of color — especially from the Dixwell and Newhallville area — have the opportunity to start businesses and participate in the activity here,” Fernandez said.

It’s also “to enable people to have access to high-quality food, both as consumers and as producers,” he said.

Renton said this will allow CitySeed to expand the work it is already doing, “to improve access to healthy food in underserved areas and increase access to jobs…also promoting more healthy food entrepreneurs”.

Among other things, it will fund “staff to run the farmers’ market, to run the kitchen, to expand capacity,” Renton said.

It will likely fund five new staff, some full-time and some part-time, including a market manager for Q House, support staff for CitySeed Incubates and a kitchen manager, she said. It will also pay for a much-needed new CitySeed Farmers Market vehicle, Renton said.

Kismet Douglass – whose sister, Frankie Douglass, is CitySeed’s community outreach manager – is one of the people currently renting space in the Q House kitchen. Others include Je T’aime Cupcakes & Cocktails, which is also a farmer’s market vendor, and Try This Pie, which makes bean pies, Renton said.

“We try to prioritize black-owned vendors” and women, she said.

CitySeed and LEAP’s proposal was one of 134 projects selected nationwide through “a highly competitive federal grant process,” Renton said in an email.

“This project will enhance food access and economic prosperity by activating Q House’s new commercial and educational kitchen as a site to develop food incubation and entrepreneurship services,” she said. “CitySeed is thrilled to bring its experience to this important effort.”