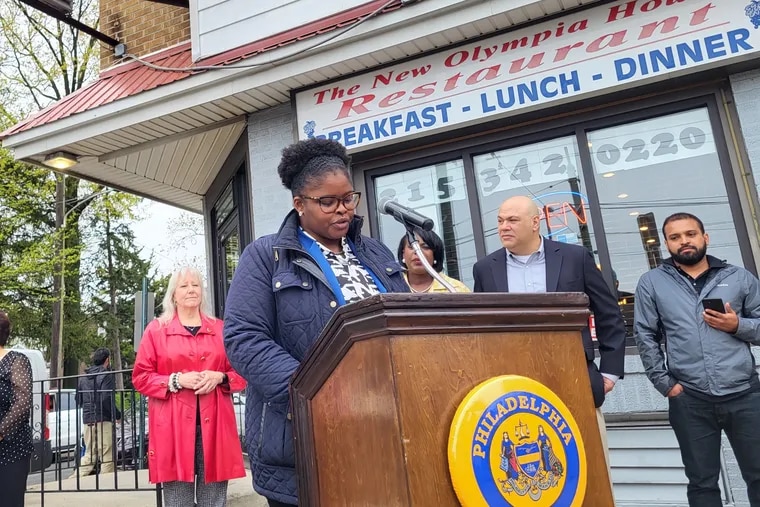 Philly’s Castor Avenue business owners say the pandemic has knocked them down, but they’re coming back

Lambros Karazournias likes to tell the story of his father leaving his native Greece, joining the merchant navy to see the world, and then one day jumping ship in America.

“He came through New York, then he found out it was too expensive in Manhattan to open a business, so he moved to Philadelphia,” and in 1987 founded the New Olympia House Restaurant at 7242 Beaver Ave.

“It was truly the American dream,” Karazournias said.

Karazournias’ father ran the restaurant with his wife until his death five years ago. Karazournias the son also worked there and has since taken over.

So when the pandemic shut down almost every small business, including his Greek restaurant in Northeast Philly’s Castor Avenue business corridorhe said “we really had to stick together”.

On Monday, he and about half a dozen other small business owners helped kick off National Small Business Week. It was an event hosted by Ninth District Council member Cherelle Parker and the Pennsylvania CDFI Networkwhich disbursed the first tranche of $225 million in pandemic relief for small businesses statewide.

National Small Business Week runs from May 1 to May 7. Business owners in Castor, Cottman and Bustleton Avenues and surrounding trade corridors “really create economic opportunity and define who we are in Northeast Philadelphia, especially the great diversity that we have,” Shante said. Antrom, executive director of the Oxford Circle Christian Community Development Association.

“Not only do small businesses here need outdoor seating, but they need access to capital, technical assistance, [and] business course in marketing,” she said. “They are the lifeblood of the community.”

At least one business owner said she only survived after receiving government assistance.

Lola Ouo, insurance broker and owner of RightChoice Insurance Agency at 6911 Castor Ave., said “almost all business activity has ceased. My clients couldn’t pay their premiums or even afford insurance. We were helpless. But as human beings, we never stop hoping and depending on each other.

Her business received about $20,000 through a forgivable loan from the Small Business Administration to pay rent, taxes and payroll, she said.

During the pandemic, the two of Luisa and Juan Hurtado Magali Spa locations – one at 6406 Castor Ave. and another in King of Prussia’s Courtside Square shopping center – also received a $25,000 forgivable loan to paint, renovate and pay the couple’s 10 employees.

Yet two years later, small business owners and entrepreneurs are hungry not just for capital, but also for technical help and marketing assistance.

“They need facilities with sales leads, storefronts, city contracts, even security cameras,” said Leslie Benoliel, director of Entrepreneur Works, a non-profit that offers free courses and contacts with banks and other lenders.

Karazournias and other local restaurateurs have applied for a $30,000 grant to install outdoor seating, a necessity as a precaution against COVID-19.

New Olympia, Tio Pepe, On Charcoal and buccaneer catering establishments installed outdoor seating with the grant, and Design Collaborative donated its time and talent for the design work.

“Outdoor seating was never there [on the corridor], and we needed it, because people really want it,” Karazournias said. He and others have also revived WAYor People Acting to Help, a group of about 60 business owners lobbying for help in the neighborhood and helping each other.

About $1.7 billion in federal funds are available for small business assistance, but are tied up amid political wrangling in Harrisburg. The state initially received about $7 billion in federal relief funds from the US bailout, signed by President Joe Biden last year. There is just under $2.2 billion left.

“There are billions of federal dollars available, but we are trying to push forward some infrastructure and other projects for the Commonwealth” in addition to helping small businesses, said state Rep. Jared Solomon, a Democrat who represents the 202nd Legislative District.

Gov. Tom Wolf wants the money to go to people affected by the pandemic, but the allocation must be approved by Pennsylvania’s Republican-controlled Legislature. Federal funds are distributed separately from the state budget.