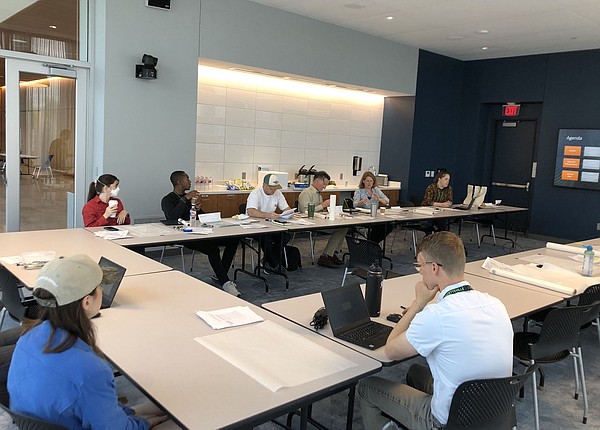 Members of the Fayetteville Planning Commission

For more information on the planning commission, go to:

FAYETTEVILLE — Planning commissioners shared their visions for College Avenue on Saturday, discussed ways to make meetings more efficient and prioritized some goals during an annual retreat at the Fayetteville Public Library.

The nine-member volunteer panel makes recommendations to city council on rezonings and annexations. It also has the final say on the more technical aspects of development, such as conditional land use permits and large-scale and subdivision plans. For the past few years, commissioners have met annually to refresh themselves on policies and procedures, get to know each other, and strategize with planning staff. The Saturday session ran from 9 a.m. to 3:30 p.m.

The rezoning of College Avenue between North and Township streets should be a priority this year, the commissioners agreed. The city is in the process of awarding contracts for road improvements along the section.

In 2017, the commission and later City Council also agreed to rezone College Avenue from Maple Streets to North Streets. The rezoning kept the commercial aspects intact, but added the potential for residential uses. The move also places less intense zoning districts between the lands facing College Avenue and the neighborhoods to the east as a transition.

On Saturday, commissioners largely talked about doing the same for North to Township streets. Specific areas prompted further discussion. For example, Commissioner Mary Madden said the Sycamore Streets area in Poplar needed fewer curbs for safety and better access for pedestrians. She suggested that the buildings on College Avenue be medium-rise and closer.

Commissioners discussed identifying land along College Avenue that is ripe for redevelopment and reaching out to landowners to encourage them to apply for rezoning. Rezoning would not change anything on the land. But if redevelopment were to take place, new buildings would have to meet the standards of the new zoning district.

Another proposal to tie some sort of regulatory authority into the city’s sustainable green network would take longer to work through, Bostick said. The city has a map that plots areas of connected green space with the intention of letting flora and fauna thrive.

The map is just that – a map. It carries no regulatory authority. Commissioners agreed that staff should explore ways in which development in these designated areas should meet certain standards to protect natural features. They compared the proposal to the city’s hillside overlay district, which has higher tree preservation and drainage standards than flat parts of the city.

Commissioner Mary McGetrick has suggested that developers increase density on part of a property if a certain percentage of the land is placed under a conservation easement. Planning staff would explore ways to place easements on smaller parcels of land.

Commissioners also discussed ways to make meetings more efficient. For example, development plans that meet all city requirements without any code deviations could potentially be approved by the administration. The average number of items on the committee’s agenda has fallen from eight or nine in 2017 to 11 this year, the commissioners found.

A presentation by Bostick also showed commissioners that half of the city’s landmass is divided between zoning for residential single-family home development or for agricultural and natural areas. The cumulative number of multi-family permit applications since 2014 matches that of single-family residential applications, Bostick said.

2022-04-24
Previous Post: ‘Electric’ Monument Avenue 10k was a ‘wonderful day’
Next Post: City Council is smart to add short-term parking on Worth Avenue