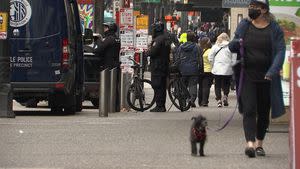 An estimated 52,000 commuters travel on the commuter-oriented street every day. Currently, much of the street is reserved for bus and bicycle traffic, but it could be reconfigured if council votes to approve resolution 32067. Proposed changes include reducing the lanes reserved for buses to make way for pedestrians, sidewalk cafes and retail businesses.

Malaika O’Rourke says that for the past four years she has walked Third Avenue from Queen Anne to work.

“Over the past few years I’ve seen an influx of struggling people,” O’Rourke said. “It’s pretty dark, a lot of stores have closed, a lot of professionals who work downtown are afraid to come downtown.”

O’Rourke wants to see change, but not at the cost of pushing others away.

At a Seattle City Council meeting on Sept. 21, Councilwoman Teresa Mosqueda expressed interest in moving forward with the resolution.

“I think there’s broad support like there has been for a long time to activate Third Avenue,” Mosqueda said.

Jon Scholes, president of the Downtown Seattle Association, has created a nearly 100-page plan, which offers ideas for reinventing the space.

“Everyone wants to see Third Avenue be a better street, and a street that we don’t avoid, but try to walk down and linger, go get a cup of coffee, and sit outside,” Scholes said.

The city is now using these renders created by DSA as a footprint for resolution.

Council member Tammy Morales isn’t necessarily against the change, but questioned whether the city has the money to make it happen.

“Given the deficit that we face, the difficult decision that we will have to make not only in this budget cycle, but for the next two years,” Morales said.