The Lodge Art Studio on Grand Avenue will close this month

The Lodge Art Studio on Grand Avenue will close this month, having presented a final group show on the third Friday in December. The Creative Space has been a staple of the downtown Phoenix arts scene for many years, but now artists with studios at The Lodge are looking for another location.

“A lot has happened in the past few months,” artist Rafael Navarro said of the change.

Rafael Navarro with one of his works at the Lodge Art Studio.

First, the building that houses the studio, which also houses Cha Cha’s tea room, was damaged in a summer storm. Last month, Navarro says, the management company notified artists that they had to vacate the building, where repairs are not yet complete.

Other artists affected by the change include Abbey Messmer, Joe Brklacich and Lisa Jacobs Handler, who have had a studio at The Lodge for several years. “It’s understandable,” said Brklacich. “As artists we have had low rents for some time.”

Support the independent voice of Phoenix and help keep the future of The New Times free.

Navarro hopes to find another location on Grand Avenue, but says he hasn’t made any plans yet.

From left to right, Fausto Fernandez, Grant Vetter and Bill Dambrova work in a Phoenix gallery.

It turns out that several Phoenix-based artists have had a studio at The Lodge in the past, including Bill Dambrova and Fausto Fernandez, whose time together at The Lodge sparked their long-standing friendship. They will showcase their work at the final exhibition, along with other artists who have been a part of The Lodge over the years.

Dambrova recalls looking for a downtown studio in around 2000, years before Grand Avenue became a hub of arts and culture in Phoenix. At the time, artists with space in the area included Steve Yazzie and the 3-Car Pile Up collective who launched the famous “Chaos Theory” exhibition. Today, artists are counting 2020 as the opening of The Lodge, which means it has 21 years of history.

He has many memories of those early days, including hauling the piles of debris left by the last tenant, installing the track lights that still exist in space today, and daily encounters with pimps and pimps. prostitutes who frequented the streets. Dambrova ended up moving to Los Angeles in 2003, then returned to Arizona. Today he has a studio in the historic Bragg’s Pie Factory building which is across from The Lodge.

Dambrova recalls that Fernandez, Messmer and Brklacich had dances at the Lodge from 2005 to 2008, during a period he calls the “heyday” of Grand Avenue, when other creative centers along Grand Avenue included the Paper Heart building.

Brklacich also has a myriad of memories. “We celebrated a lot of the life changes there, and the artists really developed The Lodge into a community space where people knew they could just come and hang out,” he says. “It really became more than a studio and a gallery, and the friendships we made there are still strong today.”

Abbey Messmer with his works at the Lodge Art Studio.

Today, Grand Avenue is home to several artist studios, galleries, and other creative spaces, including Hazel and Violet, Five15 Arts, and Grand ArtHaus.

Going forward, Navarro says he would love to stay on Grand Avenue, despite his concerns it will turn out much like Roosevelt Row in recent years, with more of an entertainment district feel.

“Me and Abbey, and maybe Lisa, are looking for a space together,” says Navarro, who is hoping something will open up in one of the buildings artist Beatrice Moore owns along Grand Avenue. Brklacich is preparing to relocate to Tulsa, Oklahoma.

“We looked for a place with a front area for a gallery, but we might end up with just studio space,” Navarro adds. “It was a nice part of the space we had at the Lodge, as we could display our work or invite other artists to show their work and organize group exhibitions.”

This public element has not always been there.

Brklacich remembers opening up the space for the first Fridays while he and Fernandez were there, and credits Steve Weiss with organizing the first group show, which focused on water rather than on the theme of the heat with which some galleries have run that summer. 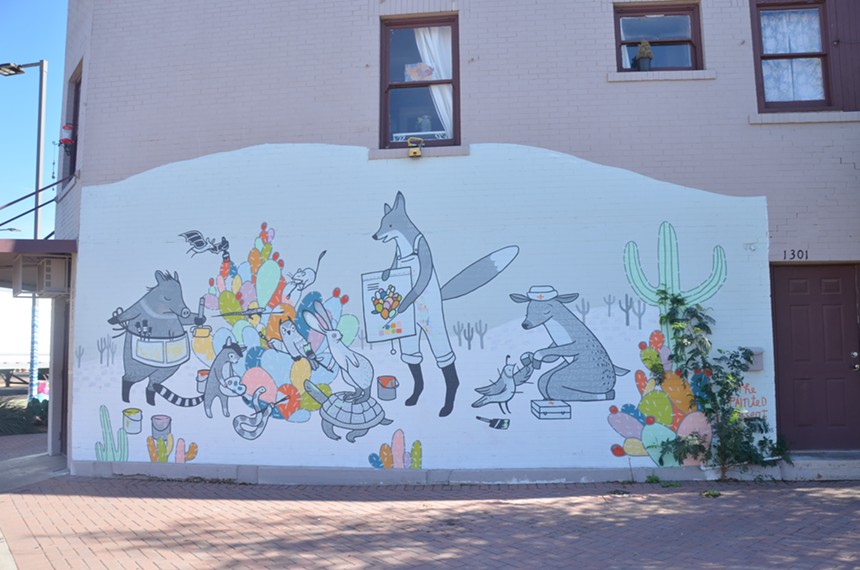 Mural by Rebecca Green at the Lodge.

Their final group show, Friday, December 17, will feature works by Rebecca Green, the artist including the 2015 mural. The painted desert still adorns one side of the Lodge Art Studio. The exhibition will also present works by Toni Gentilli, Tom Cooper, Tato Caraveo. Special guests will include Weiss and artist Charmagne Vasquez.

The artists of The Lodge announced the show on December 8, as part of a Facebook publish on the plans to close the space. “It is with a certain sadness, and a lot of warm nostalgia, that we announce the closure of The Lodge,” the post begins. “In addition to being able to share our work, we have shared our space and our lives with so many of you,” it reads in part.

Chances are there will be a lot of memorabilia at the Friday night show. But artists are also looking to the future, looking at the big picture.

“I have sentimental feelings about The Lodge, but the artists are adaptable and they will make a difference,” says Dambrova. “Especially with everything that has happened during the pandemic, we have to see these times as a beginning, not an end. ”

2021-12-17
Previous Post: 1 person dies in high-speed crash on 6th Avenue near I-70
Next Post: Jharkhand State Khadi Board interviews candidates for sewing courses